by Warren Zanes for the Montclair Local

The day before Montclair’s Adam Schlesinger passed away, my friend Paul Muldoon, poet and Princeton professor, sent an email relaying the news that Adam was on a ventilator. Like me and so many others who grieve today, Paul lived with Adam’s songs and recordings. One of the last times I saw Adam, in fact, was at a recording studio where we were both laying down tracks for one of Paul’s Rogue Oliphant recordings. After receiving the email I looked into Adam’s situation, discovering that his family was hopeful for recovery. Of course. How could it be that this bright light, just fifty-two, might be a part of the profound story of loss we’re facing? I set the unthinkable aside.

But the next day I received a text informing me of Adam’s passing. It was getting late, and I was at home with Lucian, my seventeen-year-old. Along with Lucian’s younger brother, Piero, we had shared a love affair with Fountains of Wayne, Adam Schlesinger’s best known group. Not knowing what to do with this news, Lucian and I drove into a mostly deserted Manhattan. We went through Times Square, through Chelsea, into the West Village and past the NYU building where I taught before things went “remote.” We wanted to see the places we knew, now empty and frail, as real and unreal as movie sets. We wanted to look into the face of something we didn’t yet have a face for. Lucian was the DJ, going song to song, picking from our very long list of favorite Fountains of Wayne recordings. “Cemetery Guns,” “Hackensack,” “A Fine Day for A Parade,” “All Kinds of Time,” “Fire Island.” Somewhere in the East Village, we suddenly knew that this moment, and this uncanny New York City in front of us, did have a face. And it was Adam’s. Even if Adam’s face was as unlikely and unexpected a visage for this rough historical passage as we could have imagined, it’s the one we saw. And may always.

I can remember the very minute I introduced my sons to Adam’s music. We were driving past King’s Supermarket in Upper Montclair. I was new to being a single dad. Lucian was seven, Piero five. They weren’t used to the front passenger’s seat being used for groceries. We were looking for new things to fill our minds and hearts and stomachs. It was spring, and I launched into a station wagon lecture about “summer songs.” Never knowing what my sons chose to hear and consider and what was just me thinking out loud, I explained that summer songs are only sometimes about summer. More often, I told them, summer songs have a chorus that lifts and lightens, that has a power but also an airiness. Because I was working on a Tom Petty book, and because both boys had just received cards from Petty, they knew him as a reference point. So I said, “Free Fallin,’ that’s a summer song. Summer songs make you want to marry the cashier at Shake Shack or, more conventionally, roll the top down.” After a moment of quiet, I added, “Or fall in love.” Now I knew I was thinking out loud.

I then said, “Here’s a summer song.” And I played “Troubled Times” from Fountains of Wayne’s Utopia Parkway. When the song ended, Piero looked at me and said, “Play the summer song again.” And with that we listened to Fountains of Wayne for the next two years. Almost exclusively. When I finally did fall in love, we played her the summer song and all the others we’d gathered through those two years. And Lucian, Piero, and I sang along, unrestrained, as we watched her listen. It was a lot to bring to a woman. She did so well with it. When I got that text, a short message from a dear friend telling me Adam Schlesinger had died, I fell back through time, got wrapped up in the losses and the love. That’s what good songs do. Songwriters spend years trying to write one of those. Adam wrote many.

When a songwriter and record maker of Adam’s ability and productivity dies, there’s a good thing that happens: people go back and listen a little deeper. What they’re going to find is a vault packed tight with fastidiously crafted songs and recordings. With a bruised but beautiful heart thumping underneath it all. Adam had the rare gift of “feel.” That’s an insufficient name for it, but it’s the closest approximation I can give you. Paul McCartney has feel. Prince had it. Throw an instrument across the room at one of these people and, startled or not, they’ll do something with it that you’ll want to hear again. They’ll lay into that guitar or electric piano or drumkit or bass, or whatever gets thrown, and they’ll weave melody to rhythm to lyric in a way that carries within it some echo of a more perfect place.

Adam Schlesinger had a few big moments. The first came with “That Thing You Do,” a song written for the Tom Hanks movie of the same name. With that momentum, Fountains of Wayne, Adam’s collaboration with Chris Collingwood, kicked off. Adam would also form Ivy, write for Broadway, collaborate with Stephen Colbert, and more. He worked. Slightly pudgy, looking more like an office manager than a rock star, when Adam started to play and sing he was the coolest guy in the room. He didn’t need the costume. He had the feel. Many will remember Fountains of Wayne’s hit “Stacy’s Mom.” With Adam’s passing they’ll walk through that one and into a library of song that will stir them, make them laugh, move them, make them see a few things differently. Much like we all had to walk through Randy Newman’s “Short People” to find the other world he’d created, they’ll do this with “Stacy’s Mom.” 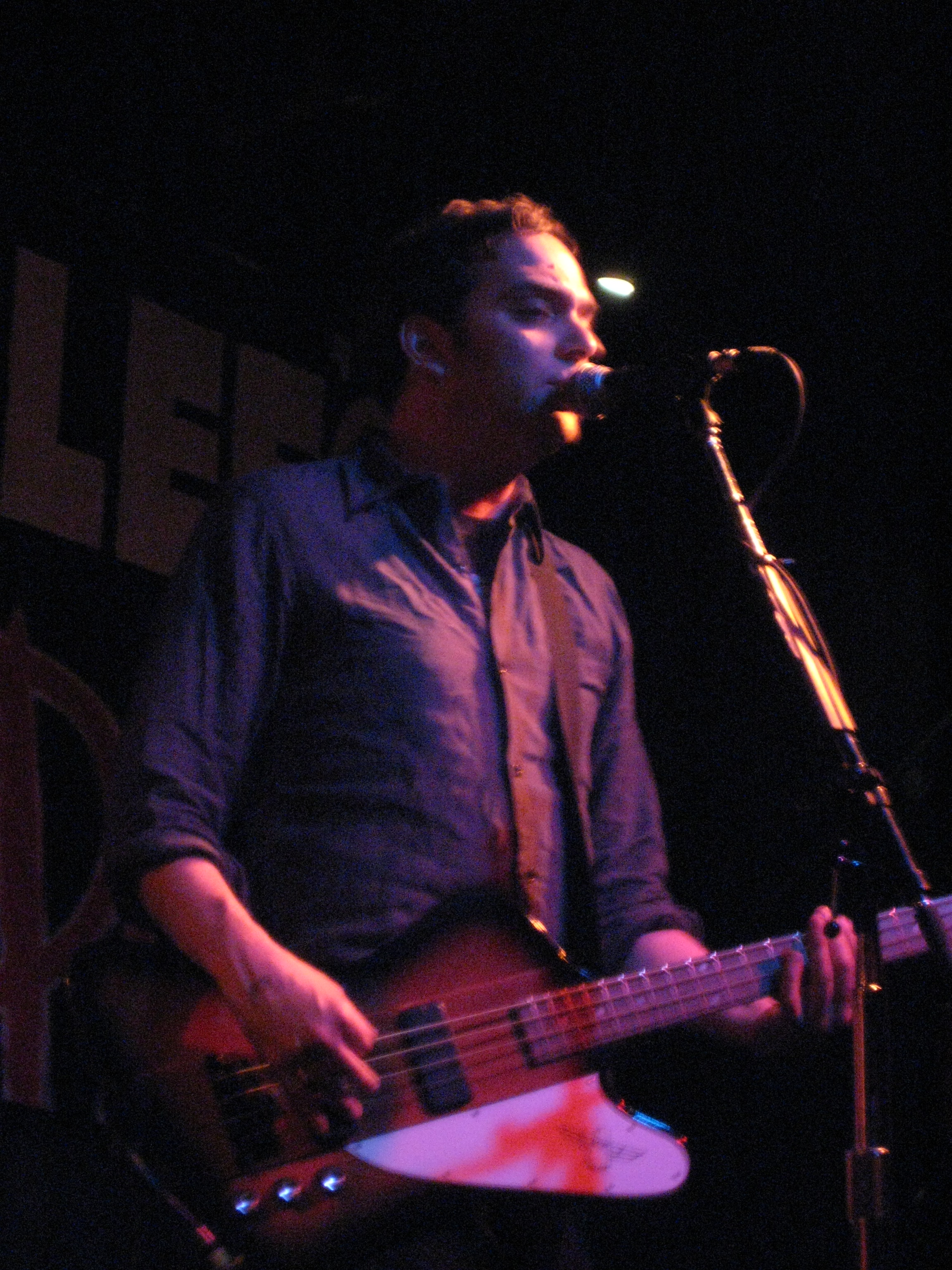 Not long after my sons heard “Troubled Times,” that summer song, Lucian came running down the stairs, yelling to me, “Dad, Fountains of Wayne is playing a show around here!” He couldn’t believe such a thing possible. It was as if the Beatles had reformed for a block party on Midland Ave. Alas, it wasn’t a show. They were going to be on the radio. WFMU. By chance, the DJ organizing this was another Montclair resident, Michael Shelley. I called Michael to get the details. It was then that Michael said, “Come down to the studio. Bring the boys.” What? Michael gave us the chance to have a private Fountains of Wayne concert. Lucian and Piero were stunned. So was I. Lucian wore his Nishuane School t-shirt. When we walked into the WFMU studio, we bumped directly into Adam.

Adam looked at Lucian’s shirt and said, “You go there?” Lucian, not having access to language in that moment, nodded. And then the kicker. Adam says, “That’s where I went.” Lucian and Piero were still at the ages when they looked around to me for validation if something seemed too remarkable to process. But I was no help. Adam was from Montclair? Our town? I didn’t know. Michael Shelley came toward a speechless Zanes family--and we were a family--and introduced us. Adam looked at me and said, “I remember your band. We saw you play at Williams. You were a good band.” Not having access to language, I nodded. My boys looked at me as they never had. I was suddenly a man with a past. Though in that instant I was also only their peer, nothing more. If I ever tell you life isn’t rich, kick me. Then our private concert began. We were gone for weeks.

Montclair, you lost a great son of this town. May your streets and schools and parks produce many more. Lucian and Piero, you now get to see how a man goes on living in the songs he wrote. People will come and go, love will sing and stutter and belch, only to sing again. Thank you, Adam, for all of it.